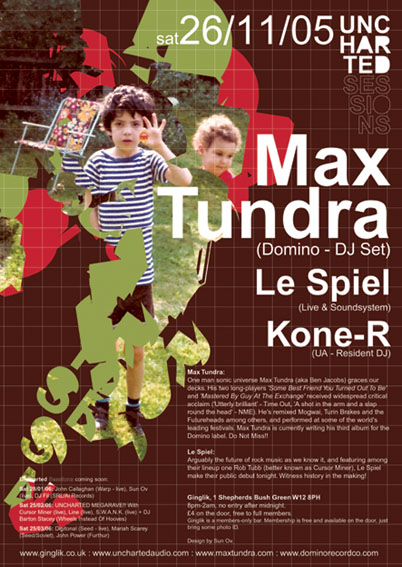 This Saturday, one man sonic universe Max Tundra (aka Ben Jacobs) graces our decks. His two long-players ‘Some Best Friend You Turned Out To Be’ and ‘Mastered By Guy At The Exchange’ received widespread critical acclaim (‘Utterly brilliant’ – Time Out, ‘A shot in the arm and a slap round the head’ – NME). He’s remixed Mogwai, Turin Brakes and the Futureheads among others, and performed at some of the world’s leading festivals.
Max Tundra is currently writing his third album for the Domino label. In the meantime he is keeping himself financially afloat by performing deliriously eclectic DJ sets for anyone who wants to dance to Frank Zappa, Deerhoof, Yes, Kimitaka Matsumae, Cabaret Voltaire, Bill Nelson, Ariel Pink, Autechre, The Waitresses, Talking Heads, Akufen, Vicious Pink, Joanna Newsom and anything else you wouldn’t normally hear coming out of the same set of speakers in one sitting. This may well include the fusing together of a Captain Beefheart and Daft Punk record.
Do Not Miss!!
www.maxtundra.com
www.dominorecordco.com

Le Spiel (live):
Arguably the future of rock music as we know it, and featuring among its lineup one Rob Tubb (better known as Cursor Miner), Le Spiel make their public debut tonight. Witness history in the making.

*please note Ginglik is a members-only venue, but membership is free and available on the door, just bring some photo ID

This entry was posted in Events and tagged Kone-R, Le Spiel, Max Tundra. Bookmark the permalink.