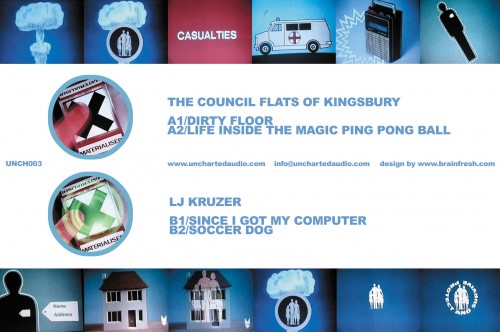 “A strange, awkward but beautiful split seven inch. The Council Flats of Kingsbury, AKA Colin Kavanagh, bring the noise with a hefty slab of bass-heavy, buzzsaw-raw dub-jazz, whilst LJ Kruzer, being the son of a vicar, brings the gentle epiphany. Like Schneider TM, his “Since I Got My Computer” coaxes an icy, winking melancholy from the machines, while “Soccer Dog” plinks and plonks like Plone at their best. Oh, and its on nice, thick white vinyl too.”

“Limited, like it’s predecessors, to 300 copies, this third release on Uncharted Audio serves up another fine spread of original and mood-moulding electronica, with London artists The Council Flats of Kingsbury (Colin Kavanagh) and LJ Kruzer (Steve Fiske) contributing two tracks each to this cracking white 7″. On the A-side Kavanagh’s ‘Dirty Floor’ kicks out a filthy grunge jam, fusing lumbering bass, distortion, feedback and raw drum licks into an intense industrial sludge epic. In comparison, ‘Life Inside The Magic Ping Pong Ball’ rolls in cheekily like the eccentric theme tune to an English country comedy. On the flip, Steve Fiske’s first offering is an enchanting slice of ambient techno that pulsates and shimmers with sublime chords and gentle shuffling 4/4 rhythms, whilst closing track ‘Soccer Dog’ scatters tiny electro beats over an emotive video game soundtrack. A highly engaging listen from beginning to end and well worthy of your pennies.”

“Uncharted Audio release a banging 7″ by the Council Flats of Kingbury and LJ Kruzer. For me the standout track is the 1st track by the Council Flats…. which is tuneful banging Add N To X with some unusual sounds in there. Clinton prefers the 2nd track by them which made him smile. There’s not enough fun in music today. LJ Kruzer does yr more standard melodic electronica. Brian here is a fave of the LJ Kruzer track called Soccer Dog. It’s one of those really rare records which all 4 tracks sound great at both speeds….”

“I think i was playing The Council Flats of Kingsbury’s Dirty Floor, the A-side of a split single from Uncharted Audio, at the wrong speed first off. The only word i could find for it was ‘epileptic,’ which isn’t the sort of thing readers take kindly to. Slowing it down to 33 revealed an irresponsibly distorted bassline – like a furious, pigeon-sized bee in your speakers – underpinning a finely-tuned mess of beats, feedback and distant voices. Fetishists might also like to note that it’s on thick, creamy white plastic. On the B-side LJ Kruzer makes a quieter impression with some inoffensive, downtempo electronica in a King Of Woolworths, City Centre Offices sort of a way. And pens a tune about a creature called Soccer Dog, to whom I would like to offer my services as an agent. TV, or to be specific ITV, beckons.”

“Ace lickle package of electronic thrills from new imprint Uncharted Audio. The glamourously named The Council Flats of Kingsbury kick out the jams with the wonderfully scuzzy ‘Dirty Floor’; sounding like Primal Scream crossed with the DFA. Whether that’s a recommendation or not depends on your opinion of those aforementioned bands. While ‘Life Inside The Magic Ping Pong Ball’ is Broadcast by numbers. LJ Kruzer turn in some bleep heavy workouts that could be called cute. ‘Since I Got My Computer’ moves through several different styles, not really settling in any particular one. But what comes out though is a well-crafted slice of computer music. ‘Soccer Dog’ errs slightly towards the more contemporary end of the electronica scale with some atomspheric use of echo and minimal melodies made from pure sine waves.”