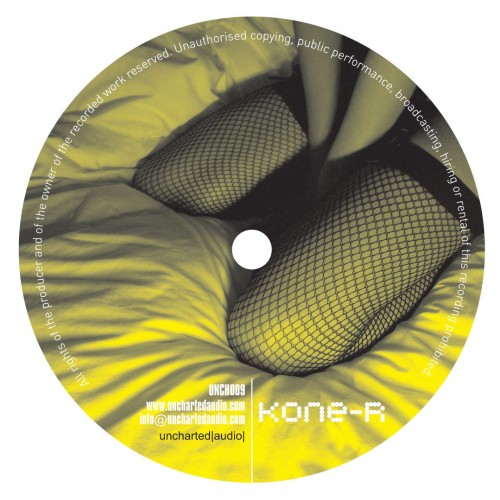 “More nice electronica from Kone-R on Uncharted Audio. This time it comes on numbered 7″. The first track is called ‘Knob’, hilariously and it’s kind of awkward odd electronic stuff that sounds like it comes from Mars. Lots of weird beeps, squeaks and squawks.”

“Nope not an assessment of the Uncharted Audio bosses character but the title of his debut solo release, ‘Knob’ itself is a curious piece, wobbly beeps and bleeps ride roughshod over a scratchy lo-fi drum track, that clicks and cuts its way through varying BPMs, resulting in the musical equivalent of travel sickness (but in a good way). ‘I’m Dubious’ provides a brief ambient coda before we flip the disc over for ‘It’s been Weeks Now’ [version] where a pastoral melody gets rudely felt up by a dirty uncle of a distorted kickdrum fashioned from white noise. Hand numbered and insanely limited, order from the UA website and you’ll get a bonus CD of Kone-R ripping it up on the decks.”

“Now this 7-incher from Kone-R (Russell Parsons, co-founder of Uncharted Audio) is a curious bit of business. Spinning discs since 1992, Parsons’ music has evolved through the complete spectrum of electronic dance styles throughout the years. Here he’s in a poppy electro mode with a pretty ambient interlude of fuzzy synth billows (“I’m Dubious”) sandwiched between motorik boom-bap in “Knob” and dueling personalities in “It’s Been Weeks Now (Version).” In the former, Parsons punctuates clockwork beats with glistening arcade electronics that chatter, sparkle, flutter, and dive-a bizarre little piece that turns epileptic before catching its breath and righting itself near its close. The latter song, by comparison, confusedly disrupts lulling episodes of soft organ musing with brittle squelches and eventually hammering breaks.”

“Knob is the debut single from Kone-R, although some of you will already with his outstanding work elsewhere as one half of electronic duo Langer, whose Whistlestop 7″ was met with critical acclaim. Kone-R also recorded the mighty Crack Of Noon for the inspirational and collectable Ai label (the 2003 Leisure 12″). Knob, the first track on the single is based mainly around its intricately sequenced synths, and a crescendo of battered mess and stuttered beats. It’s Been Weeks Now (Version) is a beautiful piece and the single highlight. Kicking off with repetitive and gentle synths, the track embarks on a scuzzed up kick drum coated with feedback and distortion. Yet these noise-heavy drums and damaged percussive beats work perfectly amidst a scenic backdrop of sugary melody. His 12 years of DJ’ing experience and extended knowledge of electronica have certainly paid off. A quality assured debut EP from this rising star – a name to watch.”

“This 7-inch is the debut of Uncharted Audio’s co-founder, who appeared on the out-of-print Ai compilation Leisure. “Knob” is a great retro-sounding cut with modulated analogue synths hearkening back to the early days of Warp. I’d love to hear a longer mix. “I’m Dubious,” also crammed onto side A, is a beatless, pretty interlude. On the flip side, “It’s Been Weeks Now (Version)” has waves of sugary electronics over speedy percussion distorted into static. These tracks are further evidence of the wonderful sounds coming out of London these days. I truly believe the genre-defining LE:01 compilation signals a resurgence of melodic electronic music.”

“Uncharted Audio’s label boss steps out of the shadows to present us with his provocative little 7”. Kone-R’s Knob is a dirty little glitch ridden shuffler that he beats around the squelch of the bottom end, actually this isn’t exactly an accurate description but it helps with the homoerotic tone I was trying to create, I blame him for sticking dirty photos on the center. Buy this you perv.”