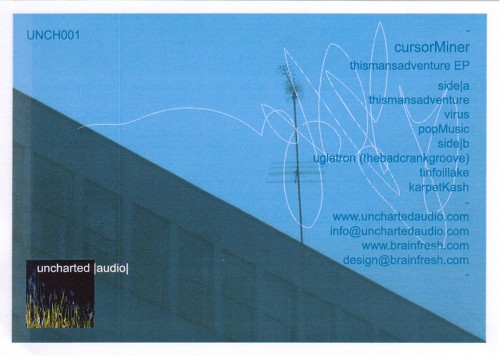 “There’s a schizophrenic melange of styles on these six tracks from London based musician Robert Tubb. The title cut serves up impossibly bombastic, jittery breaks straight from the Aphex/Squarepusher school of hyperactive beats, cut up with a host of samples culled from TV and who knows where else. “To refuse the adventure is to run the risk of drying up like a pea in a shell,” intones a very British voice, as Tubb stays true to his word with a slew of warped FX and bits and pieces playfully wielded together in an anything-goes manner reminiscent of Spymania releases. “virus” is twisted, humourous stomping pop, mashing 80’s synth lines over industrial snares and shouty new wave vocals with melodic suss and infectious energy. “popmusic” does the click thing at high speed before settling into an insanely distorted groove that will have you checking your needle for fluff.”

“‘thismanadventure’ is like the tuning of three transistor radios who’s dial allows the scanning of time, space, and radio waves. ‘virus’ is a three minute burst of electro – punk. ‘pop music’ retunes the martian radio mentioned above but then begins to encase them in molten concrete. As befits a man who appeared on The Complete Death of Cool, this EP is out there, funky, but with a sly grin on it’s wee radge face. Care in the community never sounded so good.”

“Very, very limited release from Cursor Miner. His first solo release I believe. Taking in the harder end of his sound, it’s a cross between his more industrial, rocking stuff and some of the teeth-gnashing laptop work that we love. Do not miss!”

“With the artist having recently released tracks for Lo Recordings, Noodles and Unbearable Recordings this six-tracker was eagerly received. And boy, what a find! The EP contains six incredibly inventive cuts ranging in style from abstract noise explorations to sample manipulations, quirky pop and even twisted Sid Barrett style prog rock! The common thread throughout is the combination of the perverse and the catchy. For me this is definitely the most inventive release of the year – extremely captivating and simply a delight to listen to.”